CCSD59 complies with Illinois law which specifies that to enter kindergarten or first grade, children must be five years of age by September 1st of their kindergarten year or six years of age by September 1st of their first-grade year (105 ILCS 5/10-20.12). For Ridge Family Center for Learning, which operates on a balanced calendar, the deadline is within 30 days of the start of the school year.  However, parents who feel that their child’s potential and skills are in the superior range when compared with their peers can apply for early entrance.

Early entrance to kindergarten or first grade is considered a form of whole grade acceleration and is appropriate only for those students who demonstrate compelling evidence that they are both intellectually and socially advanced. The decision to grant early entrance will be made after careful examination of relevant evidence that is provided by the parents or gathered through a district evaluation process.

After reviewing the information, if you have questions about the Early Entrance process please contact the Instruction Department at 847-593-4305. 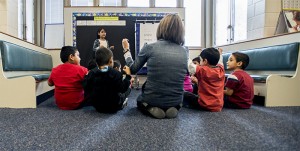 The decision for a child to enter school early can have a profound effect on his or her academic and social performance for the remainder of the child’s school career. It is a decision that needs to be taken very seriously and should not be considered for daycare reasons.  Academic readiness, academic potential, and social-emotional maturity are all equally important considerations. Children who enter kindergarten or first grade early may demonstrate social or emotional difficulties due to their relative immaturity. As they progress through school, children who are young for their grade level may have more difficulty fitting in with their peers in social situations. They are less likely to excel in sports because of their age and/or their smaller size. These and other possible effects of being younger than others in their classes should be considered carefully. In addition, please be aware that very few children who are evaluated meet the criteria to enter kindergarten or first grade early.

To be eligible for early entrance to kindergarten, children must turn five years old by December 31st of the proposed kindergarten year and must have completed at least one year of preschool.   In addition, parents will be asked to provide relevant evidence that supports their belief that their child is exceptionally advanced both intellectually and socially. Parents/guardians wishing to apply for early entrance to kindergarten should complete and submit the Early Entrance to Kindergarten Referral Form along with accompanying documents and questionnaire to the Assistant Superintendent for Instruction by May 15 of the year prior to the desired year of early admittance.

To be eligible for early entrance to first grade, children must turn six years old by December 31st of the proposed first grade year.  The student must have either:

Additionally, the child must have been taught by an appropriately certified kindergarten teacher, and must have received superior ratings from the kindergarten teacher on the most recent progress report.  Parents will be asked to provide relevant evidence that supports their belief that their child is exceptionally advanced both intellectually and socially. Parents/guardians wishing to apply for early entrance to first grade should complete and submit the Early Entrance to First Grade Referral Form along with accompanying documents to the Assistant Superintendent for Instruction by May 15 of the year prior to the desired year of early admittance.

Parents/guardians who apply for early entrance for their child must give consent for CCSD59 to complete an evaluation of their child’s academic and social readiness that can include oral/written contact with current and former teachers. Based on a review of the data from multiple valid and reliable indicators, a team that includes appropriate staff and the child’s parent/guardian will make a recommendation regarding the enrollment of the child. If a student is not found eligible for early entrance, parents have the right to appeal the eligibility determination within five calendar days after receiving the determination by submitting a written request to the Superintendent. The Superintendent will then review the case and provide parents with written notice of his/her decision.  The decision of the Superintendent is final.

Children who are accepted for early entrance will be enrolled on a probationary basis. The school staff will assess the child’s adjustment to school during the first 20-30 school days. If a child’s initial adjustment is not satisfactory, a meeting with the parent/guardian will be initiated and the school district will request that the child enroll when the child meets the state’s enrollment age requirement for the appropriate grade level or the child may be moved to the appropriate grade level. If it is determined that the child’s adjustment is satisfactory, the child may continue enrollment in the early entrance program.

A. District 59’s policy states that children must turn five by September 1 of their kindergarten year for admission to kindergarten or six by September 1 of their first-grade year to be admitted to first grade (or for students at Ridge, which operates on a balanced calendar, reach the appropriate age within 30 days after the start of the school year). However, the district’s administration may consider early entrance if children meet the criteria established by the district’s early entrance procedures.

Q. If I put my child in a private kindergarten, will he/she automatically be eligible for first grade the following year?

Q. Who makes the decision about whether my child can enter kindergarten or first grade early?

A. The District Review Team is responsible for making the final decision, taking into consideration the child’s evaluation results, academic performance, and social-emotional development. Parents will be notified of the final decision in June.

Q. Why do children applying for early entrance have to be evaluated when other children entering school do not?

A. Children who turn five or six on or before September 1 are age-eligible according to Illinois state law and therefore entitled to enter kindergarten or first grade respectively. A child whose birth date falls between September 1st and December 31st may be considered for early entrance but must meet the district’s criteria of being in the superior range of development.

Q. Is early entrance to the best choice for my child?

A. Please consider the following:

Q. What is the District Review Team looking for in the evaluation results?

A. Children cannot be tutored or prepared for developmental readiness. Assessments include a variety of activities that measure each child’s progress in the following developmental domains:

Parents/guardians wishing to apply for early entrance to kindergarten should submit the following information to the Assistant Superintendent for Instruction by May 15.