The performers all stood on stage, smiling and waving to the audience. The student audience cheered and applauded, and as the stage curtain began to close, the applause grew louder. The choral director beamed proudly in front of the stage. Once the curtain was totally closed and the performers were out of sight, the excited whoops and cheers of the cast still wearing their microphones joined in the deafening noise.

The first live performance of Aladdin Jr. at Grove Junior High School, in front of their sixth grade audience, was a stellar success.

John Harrington, principal of Grove Junior High, commented, “I am always amazed to see the many talents our students possess, and that feeling of amazement really struck me when I saw the wonderful performances of Aladdin Jr.”

The performances were a culmination of months of hard work including extensive, almost-daily practice rehearsals, production week, and several days of dress rehearsals.

Sixty-six students were in the cast, as well as five more on stage crew, all of whom collaborated and worked very hard during class, as well as after it, to practice.

The beloved story of Disney’s 1992 animated film is about a young man named Aladdin living in the streets who comes across an incognito princess and falls in love with her. In a series of misadventures, Aladdin comes across a magic lamp with a genie in it and uses his wishes to get back to the princess and free the genie, who becomes a friend. The story covers many themes that probably resonate well with middle-school students, especially having the freedom to make your own choices in life and societal roles.

Heather Wietricki, choral director for Grove Junior High, said she chose to perform Aladdin Jr. after the students saw a live performance by Broadway in Chicago in the spring. Every year, Wietricki takes the chorus students on a field trip to see a professional musical production downtown. “I thought, ‘how cool would it be to see the professional show and then put on our own production a month later,’” she said. “Students really loved it and had context for their own performance.”

Wietricki said that while it can sometimes be hard in the beginning to convince the students to make the massive investment of time and effort in performing, she is always amazed by the transformation she sees throughout the process. She discussed with the students what went well, what needed improvement, and how to fine tune each performance, and she was very proud of the students for applying what was discussed for each consecutive performance. “I saw students gain a new sense of self-confidence, make new friends with others they never talked with before, try something new, and find out whether they liked it or not,” she said. “They were working hard outside of the classroom, collaborating with each other even when they didn’t always agree, making a commitment and sticking with it to the end, and doing something they never thought they could.”

When asked if there are any particularly memorable moments, Wietricki said a moment from the first performance, put on for the sixth grade students at Grove, comes to her mind. During a scene where Aladdin (played by a sixth grade student) walks through the performance venue as “Prince Ali” and waves to the audience, Wietricki heard a commotion behind her, as the volume behind her started growing louder. “I turned around to see what was going on, and to my surprise, most of the 6th grade class was cheering and waving back to ‘Prince Ali,’” she said. “Reactions like this don’t always happen, so I was very touched and happy for ‘Aladdin’ to have experienced such an amazing moment with his classmates.”

Now that’s the kind of magic even a genie would be proud of. 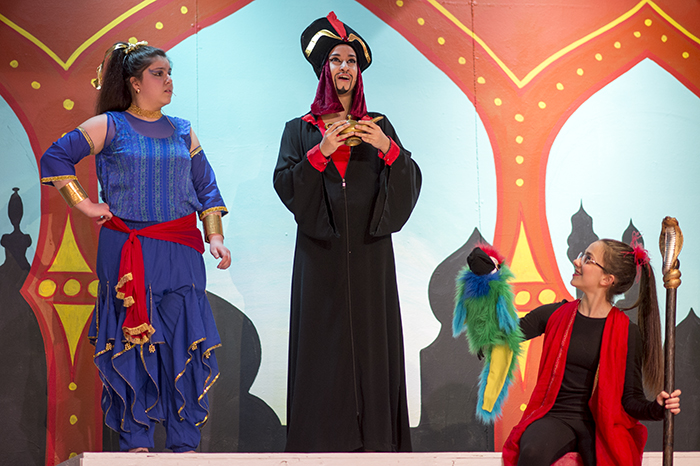