Like many who have the good fortune to celebrate their golden anniversary, Harper College is celebrating 50 years in their community among friends, including those at CCSD59.

As part of their year-long celebration, the college started “Doing More Together,” an initiative where local schools requested assistance from Harper College on projects “that would engage with students and help them be successful.” Harper provided faculty and staff volunteers to assist feeder school districts with eleven project ideas submitted by the schools. The volunteers selected which projects they were interested in.

Harper College actually selected three projects submitted by CCSD59 schools for their “Do More” week. First, on Monday, October 23, Harper volunteers were at Juliette Low Elementary helping to pass out free coats provided by Operation North Pole, a not-for-profit organization that gives free winter coats to children. On Tuesday, October 24, Harper’s volunteers were at Grove Junior High School, and participated in an interactive college and career exploration event where volunteers led discussions and activities about various work and educational opportunities. Finally, on Wednesday, October 25, the Ridge Family Center for Learning was assisted by Harper’s volunteers with Ridge’s Fall Fest event.

At Fall Fest, twelve Harper volunteers hosted fall-themed activity stations for kindergarten and fifth grade students in a buddy program. Ridge teachers Beth Soreng and Andrea Crone, who facilitate the program at the school, had submitted their idea for the Fall Fest to Harper College. The activities they suggested were designed to help build a positive relationship between the buddy students, and had educational themes with a strong social emotional learning (SEL) component.

First, the students all met to read the story Spookley the Square Pumpkin, a Halloween tale that follows the difficulties of being a square pumpkin in a world where the “best” ones are round. After finishing the book, students discussed the story, including what they learned about respecting differences, standing up to bullying, and how being unique can be an asset.

After the book discussion, students visited four different stations that had fall themes in math, art, cooking, & STEM. Fifth grade students and their kindergarten buddies each went to all four stations and performed the activities together.

At the math station, students used straws and pipe cleaners to create square pumpkins and decorated them with eyes, stems, and leaves. The art station had students tearing up paper and then gluing it to a base to create a mosaic pumpkin. Students put on their engineering hats at the STEM station, where they used toothpicks and pumpkin gummies to try to build the tallest tower possible. Finally, students were able to enjoy creating a treat at the cooking/writing/SEL station with graham crackers, frosting, and edible accessories for eyes and leaves for their pumpkins. Once students completed the creation of their edible decoration, they explained how their pumpkin was unique, and then enjoyed eating it with their station friends.

Harper volunteers assisted at all stations, providing supplies and advice to both the older and younger students, encouraging teamwork, and lending a hand wherever one was needed. They helped students reason out how to build the tallest towers, encouraged creativity in decorating their artwork, and supported working together on their projects.

Community Relations Manager at Harper College, Amie Grainger, said Harper’s staff enjoyed the collaboration with CCSD59’s students. “The Harper volunteers had a great time and were touched by the hospitality of both the faculty/staff and the students,” she said. “The event provided the opportunity for people who may normally not be able to get off campus and interact with younger students to experience the excitement younger students have about college.”

Soreng, who teaches fifth grade, said her students liked working with everyone at once. “It was great to see everyone interacting with each other. The students really enjoyed working with the volunteers, and talking to them about what they did in their careers at Harper,” she said. “At the end of the day, the fifth graders asked when the volunteers were coming back because they want to work with them again.”

Attendees of all ages had a great time, as the kindergarten students commented on it, too. One particularly enthusiastic kindergartener turned and waved to the volunteers before walking out the door, saying, “Thanks for helping us today, it was really fun! Come and hang out with us again any time you want to.” 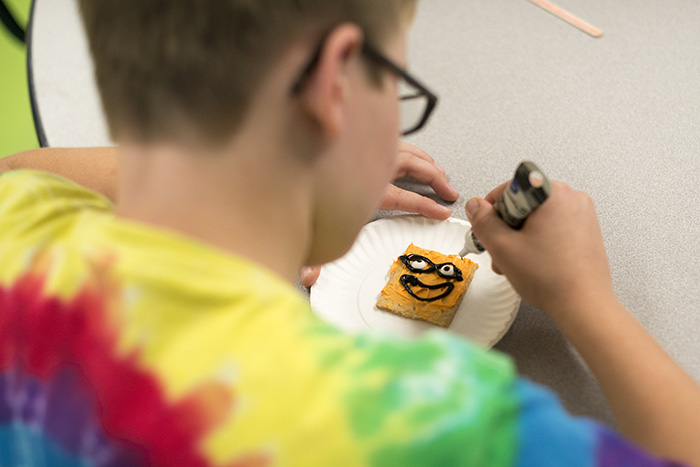